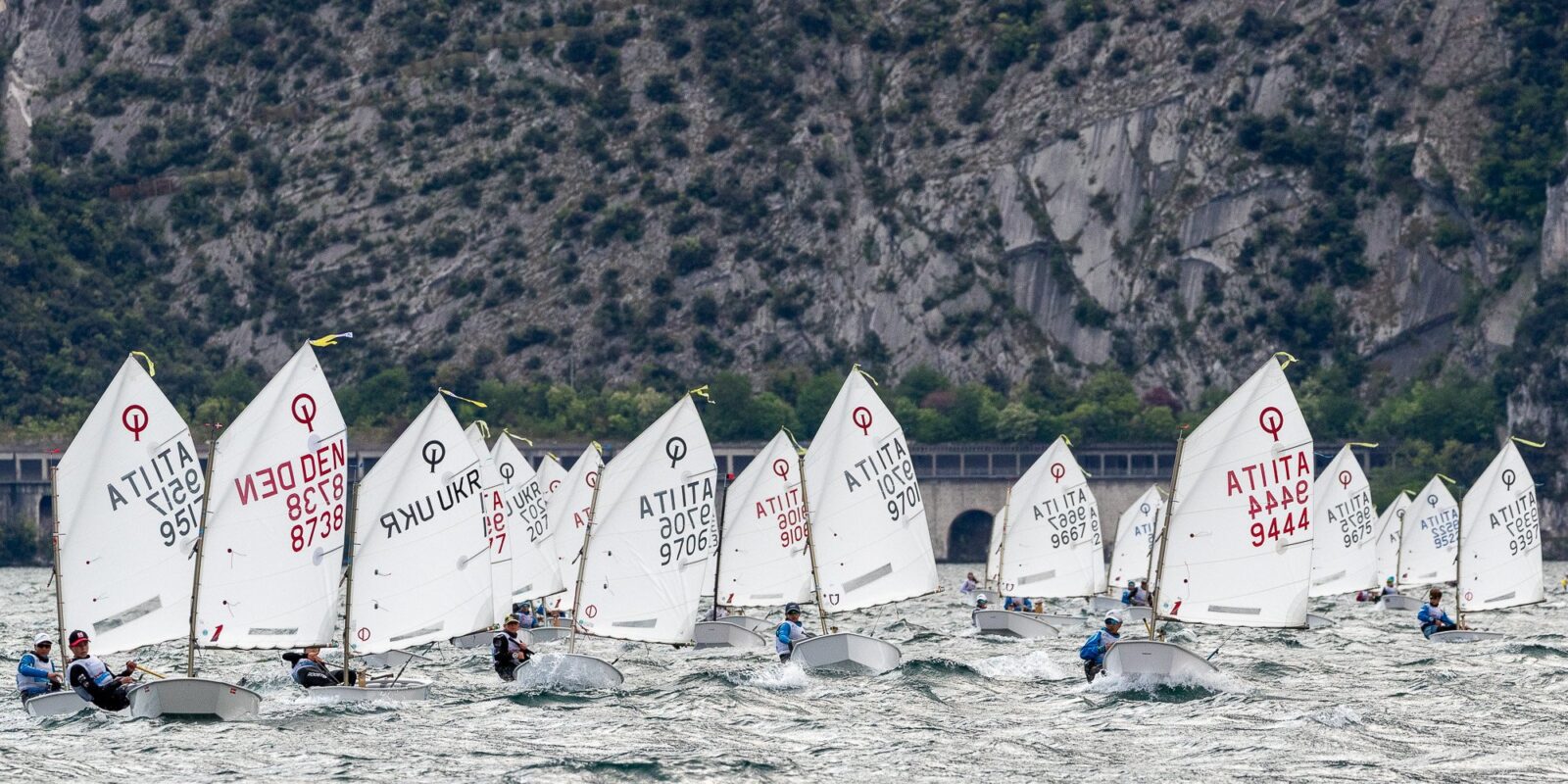 The second stage of the Kinder Cup Optimist took place from April 29th till May 1st. After Crotone, the Fraglia Vela Malcesine hosts the young and promising helmsmen from all over Italy. The event, organized in collaboration with the Italian Optimist Class, brought 115 Cadets and 305 Juniores to Malcesine, coming from all 15 national FIV areas.
In the 3 days of racing, 8 races have been completed for the Juniores Division A, divided into 4 heats in the first 2 days of qualifications and 4 final fleets on the last day. Only 5 races, instead, for the Cadetti Division B. On the first day, characterized by a beautiful Ora, the classic wind from the south, and a bright sun, 3 races are held for each fleet.
Tomaso Picotti (Fraglia Vela Peschiera), with a clear path becomes the leader of the day for the Juniores fleet ahead of Erik Scheidt (Fraglia Vela Riva) and Sviatoslav Madonich (Ukrainian Optimist Sailing Team). Bianca Marchesini (Fraglia Vela Malcesine) in first place for the women category. In the Cadetti fleet Edoardo Ghetti from Circolo Velico Tivano is in the lead after day 1.

On the second day the south wind picked up regularly and then faded away, delaying the starting procedures for the fourth start. After a short wait, the wind started to blow steadily again with 12 constant knots, adding to the program 2 further races for the Division A of the Juniors and 1 race for the Division B of the Cadets. Erik Scheidt (Fraglia Vela Riva) takes the lead, while Antonino Mortillaro (Vela Club Palermo) is in the lead among the Cadets. Upon returning, the wait is all for the extraction of the Nautivela boat, offered by Kinder Joy of Moving; to introduce this moment the sailor Cecilia Zorzi, spokesperson on the subject of environmental sensitivity. The winner is the cadet Nicolò De Santis from Tognazzi Marine Village.

Third day with an early morning wake-up for the young sailors and first warning signal at 9.00, making the most of the Peler!
With the last 3 races, Erik Scheidt (Fraglia Vela Riva) is confirmed as the winner of the 2nd stage of the Kinder Cup, followed by Sviatoslav Madonich (Ukrainian Optimist Sailing Team). Tomaso Picotti (Fraglia Vela Peschiera) closes the podium. First female place for Emilia Salvatore (Fraglia Vela Desenzano). Award to the first helmsman born in 2011 to Irene Faini (Circolo Nautico Brenzone).
The Cadetti podium sees in first place Antonino Mortillaro (Vela Club Palermo), in second place Nibbi Giorgio (Circolo Nautico Sanbenedettese) and in third Filippo Noto (Società Canottieri Marsala). First female place for Dallò Giulia (Circolo Velico Tivano). Award to the first helmsman born in 2013 to Nicolò Lonardi (Fraglia Vela Malcesine).
The baton now passes to the Club Nautico Arzachena for the third of the five stages, scheduled from the 3rd till 5th of June.